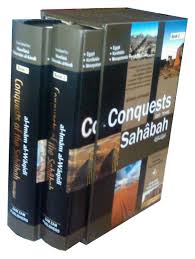 From your reply I see the need to specify what the point of contention is.

thored by al-Waqidi. That, insha Allah, was a reliable source of history, like Waqidi’s other works. This book is unfortunately mafqud,

with no sign of it anywhere in the world.
Thus, the discussion has nothing to do with Waqidi’s reliability.

Our discussion is focused on the book in print, titled “Futuh as-Sham” and attributed to al-Waqidi. It is also translated as “Conquests of the Sahabah”.

There are two major issues with this book:

The first issue is the Ascription.
While the book has been ascribed to al-Waqidi, there is absolutely no doubt in the falsity of this ascription.
The book was definitely authored centuries after al-Waqidi, in all probability by a historian of the 7th or early 8th century. This is clear from the quotes in the book from authorities that lived centuries after al-Waqidi.
Similarly, any person with knowledge of asanid would know that the asanid mentioned in the book could no way belong to al-Waqidi. They are double or triple the length of his asanid, from shuyukh who lived after him.
Then, those with expertise in the Arabic language make it clear that the language of the book is that of centuries later, definitely not of the 2nd and 3rd century.
The same goes for the poetry mentioned therein.

Then you have the number of integral facets of the book that run contrary to the widely-narrated view of al-Waqidi.
For example the book is filled with the exploits of Dhirar, however al-Waqidi without a doubt believed Dhirar to have died in Yamamah, before the Conquests of Sham even begun. This view of al-Waqidi has been transmitted from him by all the giants in the field. So, how would it be possible for al-Waqidi to have still authored a book detailing every minute detail of Dhirar’s exploits, when he believed him to have died years earlier?
Any person who reads the book with a critical eye, would immediately spot these glaring discrepancies in its attribution to al-Waqidi.
It is for this reason that dozens of scholars have clearly stated that this book is definitely not by al-Waqidi.

Here is a list of some of the researchers who mentioned this:
http://tinyurl.com/a5uygbz
I have come across many others who have stated the same and plan on compiling their names in an article soon insha Allah.

Here is a portion of a book that also discussed the incorrect ascription:
http://www.mediafire.com/?zy0mwmyjncy

So, to conclude, the author of the book is unknown. It is probably a 7-8th century historian, but is is definitely not al-Waqidi.

The second issue is the reliability of the contents.
As mentioned above, the book isn’t by al-Waqidi, rather by someone coming hundreds of years later. It is obvious that the author wasn’t present at the time of these campaigns, thus the necessity for him to have narrated them from reliable sources.
Who are his sources?
He quotes many passages from al-Waqidi’s Futuh as-Sham, however those make up a small portion of the book. Where is he getting the balance from?
A book by an unknown author who isn’t divulging his sources holds no academic weight.
Then, to get an idea of the accuracy of his narrations, all one has to do is compare his narrative with those of the accepted historians.

I have compared numerous chapters of Futuh as-Sham with books considered the “Sihah” of tarikh viz. al-Bidayah wa an-Nihayah, Tarikh at-Tabari, Tarikh Ibn Athir, Tarikh Ibn Khaldun, Tarikh Madinah ad-Dimashk of Ibn Asakir etc. While differences in narrations are normal and acceptable in tarikh, the problem here wasn’t slight differences between narrators. It was as if two different campaigns were being compared.

All the famous books of tarikh would narrate the campaign along similar lines, while Futuh as-Sham would differ in every possible manner: from the year of the battle, the order of the conquests, the leaders of each battle, the manner in which the battle played out and even the casualties. Add to this the tons of heroic exploits and fine details only found in this book and it becomes clear that this isn’t a book of history.
It is a novel, written by some well-intentioned, yet misguided historian, who felt that fabricating these heroic exploits was an acceptable manner to get people to love the Sahabah, similar to the misguided Sufi’s who fabricated ahadith in fadail.
The author fabricated numerous characters to serve as his heros’ and spiced up the lives of others for the same purpose.

The link I posted above quotes a number of researchers who have studied the book and have arrived at the conclusion above.